Quick links: my home page • my blog • Choosing My Confessions

First published in The Caribbean Review of Books, August 2006


“There was a sadness to his eyes as he continued to devour yet another victim with as much desire as he once had so that even with that sad look there was a knowing glint almost like a looking of amusement . . . A small story about hunger and survival in a small place.”

“Those early days sitting in the water and watching the horizon and looking backwards to the edge of the island and wondering about the space in the water and on the edge between what looked infinite and what appeared to be finite or known and understood allegedly . . . Further explanations while submerged.”

These lines, with their colliding echoes of Harris and Naipaul and Lamming, could well have been plucked from a novel or metaphysical treatise by some unknown, darkly eccentric Caribbean writer. Instead, rendered in an ornate and nervous script, they are scraps of text from the edges and corners of a new series of drawings by the Trinidadian artist Christopher Cozier. “The idea is a kind of associative writing, a rambling. I’m never sure if they’re explanatory, or if they’re sort of parallel.”

In his studio in St Ann’s, in the hills north of Port of Spain, Cozier has pinned some of the drawings to a wall. Others are stacked on a table. I turn them over like the pages of a book. The title is Tropical Night, which suggests some version of noir. Dark browns and sepia tones predominate, and some of the drawings are fragments of nightmares: a man in a fenced enclosure gobbling human flesh, a Cyclops stuffing something bloody into its mouth. But Cozier says what he’s trying to get at is something decidedly more mundane.

“There is a kind of day that is very grey or brown . . . it is a mood or tone I often feel on a dreary day, waiting for a taxi before it rains or going to some kind of daily routine . . . It’s the experience of being on the street in open space, or just inside ourselves. What do we feel, what do we choose to notice and sense on a given day? It’s about the internal and external landscape of the place as I experience it.”

Above all, Tropical Night is about the very act of drawing. “It’s about investigation, speculation,” Cozier says. “Drawing is my handwriting, my thought process.” Drawing is also a deliberate choice, the tentativeness of “notes on little pieces of paper” his response to the grandiose “millennium talk” of painting on canvas. “I often use the word ‘note-taking’. Note-taking to me is conceptually very important. It has to do with notions of being sure and unsure . . . I feel an empathy with the ephemeral.” And drawing becomes almost performative: “When I make those marks, there’s a sense of being alive. It’s a domain of possibility.”

The nine-by-seven-inch Tropical Night drawings, which Cozier started working on in late 2005, are a kind of hunkering down, a return to basics, after several busy years of travelling and showing abroad. “I’m trying to get rid of the rhetorical, get rid of all the familiar symbolism, and see if I can arrive at new signs, new symbols. I’m basically extending and expanding the vocabulary.”

Many of the drawings hint at questions of property, of ownership, of contested space. One depicts a political announcement in the style of a fete poster. In another, “Place Your Bets”, a ballot box is branded with a “Lucky 7”. A dog marks the corners of its territory — the page — with yellow splashes. A version of an antiquated Old World map appears again and again: on a blackboard, superimposed over heads with blank features, and as a ship’s sail mounted on the back of a swimming figure in a haunting drawing called “Castaway”.

As I sift through the drawings, I sense a narrative struggling to emerge. “I feel like I’m still on the outside of the story, trying to get in — it’s very much like a literary enterprise.” For a moment Cozier sounds like a novelist in the early chapters, still trying to discern his plot. But later I realise the analogy is false: what matters is not some elusive narrative thread, but the unresolved state of being the drawings seem to chart, viewed not singly but en masse. They are, you might say, snapshots of a stream of consciousness: things imagined or observed, anxieties, fantasies, ideas obsessively returned to, things felt more than understood.

I hand Cozier the drawings and he makes a neat pile, perhaps seven inches high, on a tall stool. We contemplate the bundle.

“Sometimes I wonder if the way to display this work is just a stack of them in a glass case. You can’t see them, but you know they’re there.

“When you look at that, it’s just so beautiful. It’s a stack of paper, and all the mysteries that it entails.” 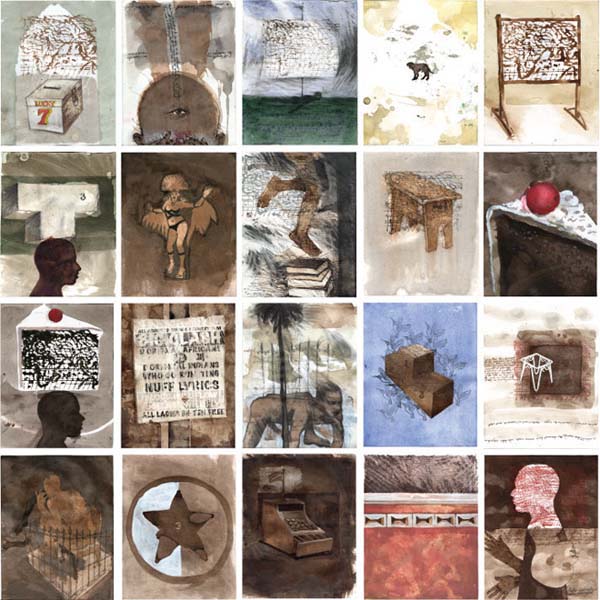 The Tropical Night blog is a creative collaboration between Christopher Cozier and Nicholas Laughlin, evolving from the series of drawings. See more images from the series in this Flickr photoset.